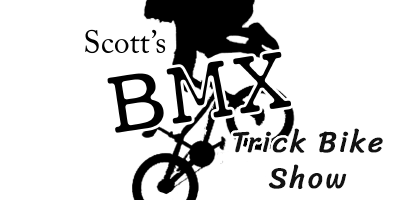 Scott Hone leads students on a lifetime adventure made of dreams. Almost everybody has ridden a bike but no one rides a bike like Scott. Backwards on the front wheel. Frontwards on the back wheel. Frontwards on the front wheel, backwards and upside-down. Telling the story of his first bike all the way to joining the circus Scott demonstrates how thinking outside the box and trying new things can lead you on a grand adventure through life.

This is the story of how, when Scott was given his first BMX bike, he asked “Is there another way to ride this?” His determination to answer his own question led him first to join the Circus, then tour the world doing BMX tricks on stage in front of thousands.

This is a show about self-discovery designed to encourage students on their own life journey with a can do and what if I, questioning approach. With an incredible finale, six people on the bike at once, Scott’s BMX Trick Bike Show is certain to inspire the next generation.

Scott Hone is a father of two, BMX rider, juggler, acrobat, clown, photographer and teacher who started his performing career with Circus Oz and has gone on to perform at countless festivals around Australia and the world. He has performed in prestigious locations such as Broadway New York City, London's Royal Festival Hall and the Royal Albert Hall and Australia’s own Sydney Opera House. As well as teaching tumbling and acro at local dance and circus schools, Scott is a qualified school teacher who does casual relief teaching at local western Melbourne high schools.

What others have said:

“Scott Hone…puts his trusty bike through an impressive display of wheelies and twirls."

“…he balances like a prima ballerina on the handlebars of the BMX bike.”

“Hone turns out to be a surprisingly skillful juggler as well…”

Requires:Prefers an indoor venue 8m deep x10m wide x 4m high. Usually bigger the better. At a pinch can do 6m x 8m x 4m high. Can do outdoors but must have a hard smooth surface. No gravel car parks. Basketball courts / school gyms are great.