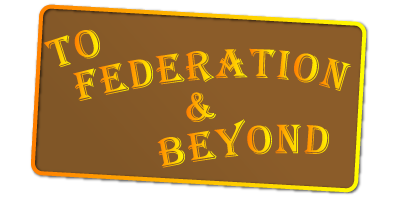 HSIE, SOSE, Society & Environment / Culture: Significant Events and People. The role of People and their Contributions. The Formation of Australian National Identity.

Teaching Australian history with loads of music, humour and fun.

This engaging combination of music, participation and stories all presented with a wonderful array of costumes, sets and props - is a great way to both entertain and tweak children's interest in Australian history. To Federation and Beyond is a number of gripping tales of Australia from pre-colonization, convicts, battlers to our current bush fire fighters and surf lifesavers.

Meet the Guv. His job is to maintain law and order in the new colony and he doesn't hold back on the punishment when convicts are caught stealing from the government's stores. When gold is discovered our Bushy Ranger's fortunes also improve. Will he strike it lucky or will he have to do a fair days work for a fair day's pay?

Australiana Bill declares that A is for Australia and it's time for Federation. Then it's onto the present day and a song to salute our modern day heroes.

The music is a mix of live, pre-recorded, original and traditional songs. There is loads of audience participation with students on stage and at times the entire audience is involved in sing-a-longs and zany actions.

To Federation and Beyond is a one hour history of Australia, presented with a healthy dash of the larrikin that has made Australia the country we all enjoy today.

All students enjoyed the show and there was a lot of positive feedback in follow up performing arts lessons. They enjoyed the physical comedy, audience participation and songs. Gerard was friendly and well organised. Good at handling a large audience.

Delivered the content in a fun way, students were involved in the performance, so more engaged than just watching. Very Good.