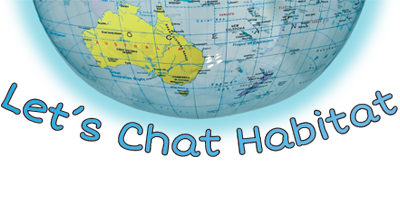 Let’s Chat Habitat is a colourful collection of short segments with the common theme of taking care of the environment. It tackles both the micro and macro from litter in the playground, turning off taps, lights and appliances, to the protection of endangered species. Students are shown how everyone doing a little can make a big difference.

The variety style format allows this show the flexibility to swap between performance genres, giving the performance a lively energy and pace. Rap and opera singing green peas and peas doing im-pea-sonations, audience participation, morphing puppet fish reciting poetry, whales, sharks and dinosaurs are just a few of the colourful characters used to explore the many ideas raised in the show.

The show opens back in prehistoric times as Dina Dinosaur lays an egg which hatches almost immediately. The scene that ensues between mother and baby is hilarious but at the same time shows that size and strength are no guarantee of survival when dealing with nature.

All manner of objects including a giant inflatable earth, a dark cloud which in the blink of an eye transforms into a rainbow and signs to aid memory, are all used to help convey the concepts and ideas dealt with in Let’s Chat Habitat.

Excellent. Vivacious and really got the kids engaged! Kids loved it – they have been picking up rubbish and turning lights off!

Excellent. Timely – will fit in with recycling (science) and Habitats next term. The performer was captivating, very enthusiastic, theatrical and used props well.