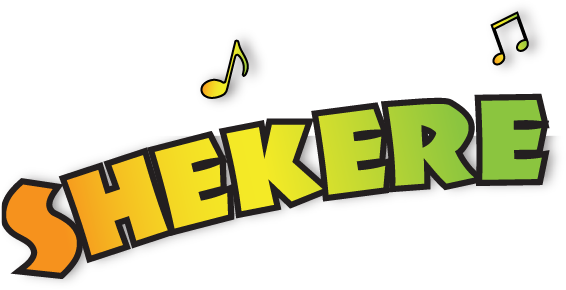 Get your students up and dancing as others beat out their own,
newly learnt, African rhythms.

Shekere “pronounced She-Ka-Re” is the name of the African percussion instrument made from the dried fruit of the gourd vine and loosely covered with a wide decorative band of beads. The sound is produced by holding the outer cover of beads in one hand and twisting the gourd across them or simply shaking the entire instrument.

Shekere Beats samples the various African rhythms (predominantly 6/8 time) produced by the shekere and other percussion instruments. After establishing each beat Jonas adds the vocals to produce the completed song. A number of songs are produced in this way and African links are shown to many well known popular modern songs. While watching and listening to Jonas is always a pleasure there is nothing quite like joining in, and Jonas has just the instruments and offers ample opportunity for your students to demonstrate their musical prowess. With Jonas’s quirky African style, numerous drums and percussion instruments, guitar and uniquely African wood and seed-pod xylophone, Shekere Beats is both a great exploration into the world of live music and a wonderful glimpse into another culture.

Jonas speaks a number of different languages and teaches students a few new words with the entire audience repeating the African word for a number of the instruments and props he uses. With the retelling of short stories from his childhood of lions and their prey, life in Ghana and his journey from Africa to Australia, students gain an understanding of African culture.

Jonas Tandoh was born in Ghana and has been a full time musician since the age of seventeen. He has played in numerous bands both here and overseas. As a founding member of the group Kalabash, Jonas toured widely supporting bands such as Osibisa and Ziggy Marley. Jonas is also a composer of many recorded songs and has been touring into schools for over twenty years.

All students thoroughly enjoyed the show. Jonas was friendly, engaging and entertaining. He involved the students in a safe and comfortable way.

Very engaging for all students (just the older cool kids a bit reluctant to participate) Jonas was brilliant. Fun. Educational.

Very engaging and fun to watch. Jonas was great with students.