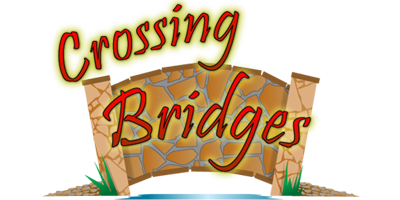 A collection of stories about journeys across bridges, some real and some metaphoric.

The first story is an updated version of The Old Lady Who Found Sixpence. This is a fun ‘adding to the list’ story in which the storyteller gets to show off her articulation and speed as she rattles through the ever increasing list, until a solution to the old lady’s problem is found.

The second story is a retelling of the Three Billy Goats Gruff. In this version a saw, a spanner and a hammer want to build a home for themselves on the hill across the river. However the only way across is over the Glockenspiel Bridge and it is guarded by a mean power drill.

Thirdly, a story about a young girl who lives in Brisbane and can see the Storey Bridge from her bedroom window but has never crossed it. She dreams about the people on the other side of the river, across the bridge where the buildings are taller. It’s not until one day when returning from Grandma and Grandpa’s place, when Great Uncle Robert, who they always pick up on the way, doesn’t want a lift home, that she finally crosses the Storey Bridge. It’s then she realises where her grandparents live. She has been on the other side of the bridge many times but without ever having crossed it.

The last of the main stories is of a metaphoric bridge from one land to another. It’s a zany contemporary version of the classic ‘Jack and the Beanstalk’ told in rhyming couplets with lots of contemporary references and lashings of humour.

These four main stories are introduced, joined and complimented by a conflict between an outrageous crocodile and the storyteller who doesn’t believe the crocodile is meant to be in the show at all.

The stories were fantastic and engaging. Karina kept the whole audience excited for the hour. She was an absolute pleasure to work with. She is an asset to School Performance Tours.

Excellent - Entertaining - all children were engaged for the whole performance - stories and puppets well executed and enjoyable to listen to. Karina is very funny and has great expressions.

The students were engaged and really enjoyed the performance. Karina was very enthusiastic and engaging. Great Q & A session at the end.