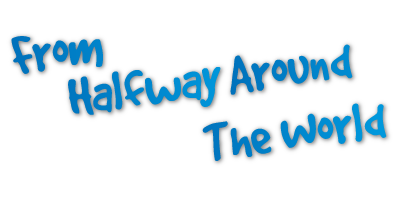 Explores the culture and lives of children from different countries.

From Halfway Around The World is a collection of seven stories plus chants, poetry, rhymes and children’s games. There are true stories, a fable, a fairytale, a dreamtime story and by the end of the show when the same tall story is being told for the third time the whole audience is involved.

In one of the three audience participation segments, four students are invited on stage to join the American pom-pom waving cheer squad as the rest of the audience perform the chant to spur the team to victory.

From Halfway Around The World looks at the vast differences in the day to day life of children around the world. During winter in Canada, children cover themselves from head to toe in many layers of thick clothing and their favourite activities are skiing and ice-skating but in summer it is warm enough for them to go swimming.

These glimpses of life in a first world country are contrasted by a true story of one child and their family’s treacherous, almost fatal journey across the globe from their third world home to New Zealand. Depending on the audience age, this modern day experience is paralleled with the traditional fairy tale Snow White and the Seven Dwarfs. Both Snow White and the Afghani family had to flee from their home and seek the charity of others.

The show ends with a glimpse of New Zealand with about a dozen students (depending on the size of the stage area) all doing what is arguably the world’s most famous chant, The Haka.

With a kaleidoscope of colourful characters, some truly outrageous costumes, and its ever changing pace, From Halfway Around The World has a lot to offer. As well as being an engaging and entertaining show it aims to encourage students to tell their own story and to consider the often strange similarity between fact and fiction.

All stories told with humour and children were attentive throughout. Hugh established a good rapport with the children from the start.

The presenter had a good variety of style of material from many countries, props were simple but good and it was very funny.