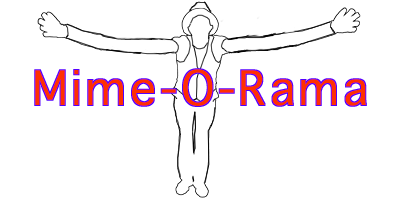 While Dennis Clare often speaks throughout the show, his loveable characters are mainly mute and their world is a world of imagination where the unexpected is the norm. This is a world in which giant, but incredibly mobile slinkies are inhabited by silent, yet sociable characters. The intentions, wants and moods of these gregarious creations are totally understood by the audience and thus their intriguing stories are told. Single eyes, some huge, others small, appear and make their opinions known with nothing more than a tilt, sudden move or a long, still stare.

This welcoming world of mime allows students to interpret the language for themselves; to open up their imagination and realize there is so much more to communicating than just the language we speak.

Mime-O-Rama was FANTASTIC!!! We have had some wonderful incursions from School Performance Tours but this was the standout. Immersive, engaging and interactive - even the 'hardest to reach' students were on the edge of their seats.

The performance by Dennis Clare "Mime-O-Rama" was exceptional. Dennis was able to engage all the Andale students and keep them engaged for the entire performance (a feat not often achieved with our students!)