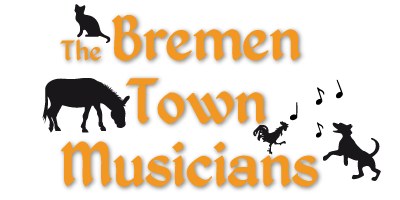 Showing how cooperation and working together gets positive results.

The Bremen Town Musicians is a story about finding new friends and working as a team to solve problems and getting old but refusing to become ‘useless’ in the process.

We meet Donkey, Dog, Cat and Rooster - as one by one they decide to run away. You see, their respective masters have decided they are too old to be of use any more.

One by one they form a group and journey to Bremen where they plan to become musicians and peacefully live out the rest of their days. But things don’t go smoothly. The group finds itself falling victim to thieves until friendship and team work save the day.

Based on the Brothers Grimm fairytale, this production by Purple Capsicum Puppets incorporates slapstick comedy, puppetry, audience participation and live music to tell this age-old tale. The whole audience gets involved, when with the help of a few brave volunteer conductors, everyone is led in an hilarious ‘audience orchestra’.

Purple Capsicum Puppets was formed in 2008 by Michael Bevitt and Beth McMahon. They have studied puppetry here and abroad and performed at Woodford Folk Festival, UNIMA International Congress and the Adelaide Fringe Festival where they won ‘Best Puppetry’ award for their performance of ‘Nightlife’.

Highly engaging show enjoyed by both students and teachers. The show helped to develop students' social emotional learning skills - resilience, team work. Beth & Mike were entertaining and funny. Loved how they involved the students and spoke to the students afterwards.

The students were highly engaged right from the start of the show. The content was levelled appropriately, students laughed at the right times and participated as necessary. Beth & Mike were very friendly, highly energetic and extremely entertaining.