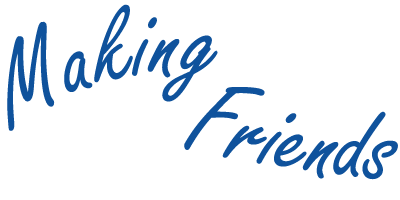 Easy to remember strategies to deal with bullies and make new friends.

Louise has moved interstate over the summer break and the only person that she knows at her new school is Cameron, the little boy who lives next door. Cameron is really sweet but he’s only five and going to school for the first time. Louise encounters difficulties when she tries too hard to fit in and make friends at her new school, so she starts inventing ways to avoid having to go.

Things get worse as the bullying starts, but with good advice from her parents and teachers, Louise eventually settles in and even agrees that her new school is just as good, maybe even better than the one she had to leave.

Making Friends looks at building new relationships, fitting in and dealing with bullying. Amusing, updated, fractured fairytales, Snow White and the Seven Dwarfs and The Three Little Pigs, both written in rhyming couplets are used to entertain while getting the show’s simple “ABCs” strategy across.

Along with three outrageous pigs, a very cool wolf and one very wicked queen; two students are invited up on stage to play the roles of Snow White and the Handsome Prince. Simple, easy to remember strategies for making friends and solving conflicts are reinforced throughout this very funny and entertaining performance.

Louise eventually befriends Tio who is also new to the school and the two of them help Tio’s younger brother settle into his first year at school.

It was a great show. Karina’s performance was engaging and thoroughly entertaining.